Professional road cyclist Steven Kruijswijk of Team Jumbo-Visma, current number 3 in the general standing of the 2019 Tour de France, was spotted at the Dutch talk show De Avondetappe wearing his Omega Speedmaster wristwatch. A quick search revealed that he’s a man of great taste, as judging by his official team picture it appears to be an Omega Speedmaster Professional. And do I spot a little hesalite glare? It appears that the watch of Steven Kruijswijk is indeed the one and only 311.30.42.30.01.005!

Way to go Stevie – best of luck for days ahead!

I loved my 30th birthday #Speedmaster ’57 Rory McIlroy so much that @OMEGA is making more!

Two weeks ago Rory McIlroy shared a picture of a special Speedmaster ’57, which his ‘Omega family’ gifted him for his 30th birthday. As a suave follow-up, today he shared that the watch will in fact be made as a special edition. 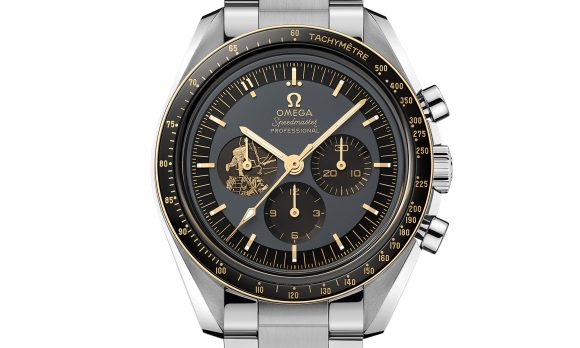 As we’ve come to expect from Omega, the watch is chockfull of details that refer to its raison d’être, new technical wizardry, and hints to the deep history of the Speedmaster in general. Now that the dust has settled a bit, let’s go over a couple; 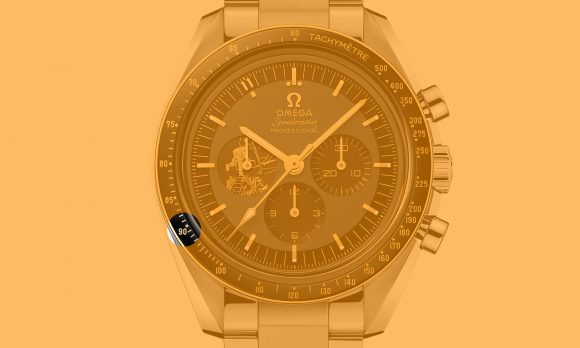 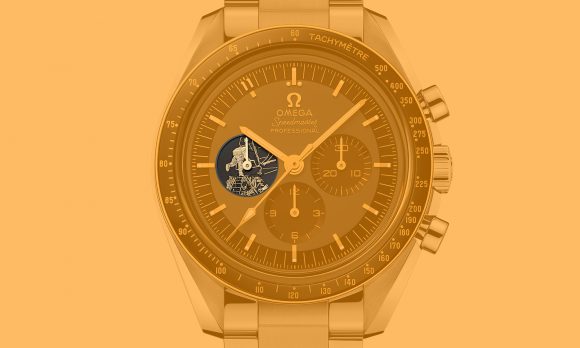 At 9:00 we find an image of Buzz Aldrin stepping out of the lunar module, based on a photograph taken by astronaut Neil A. Armstrong, commander, with a 70mm lunar surface camera during the Apollo 11 extravehicular activity (EVA). 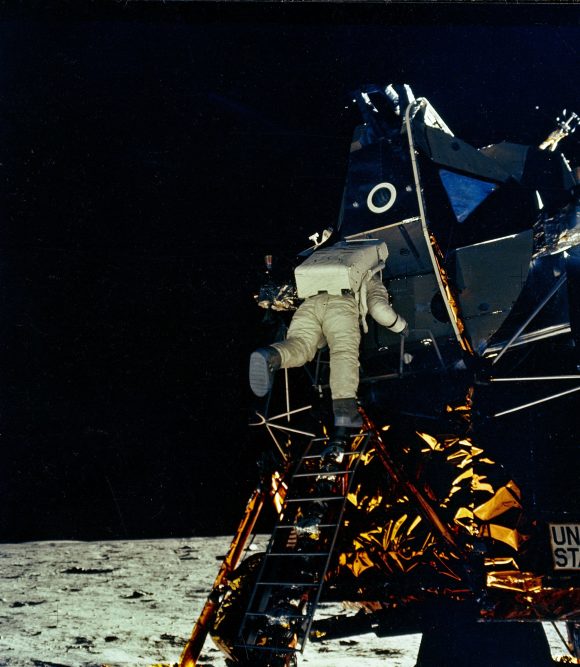 The engraving, done by laser on a plate of Moonshine gold, is particularly finely done – as shown in this close-up by Omega; 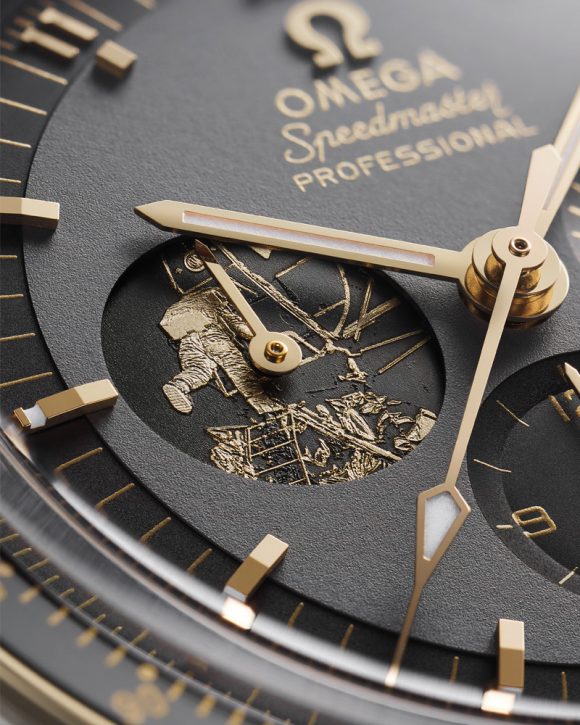 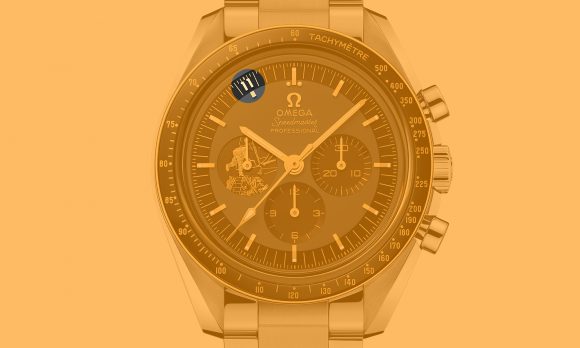 Another reference to Apollo 11 is found at 11:00, where the stick markers sees itself replaced by an Arabic eleven. I must shamefully admit that I only noticed this today! 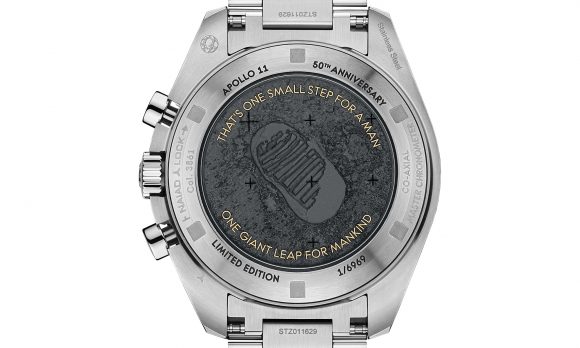 More interesting bits are found on the back.

The Footstep – of A Man? 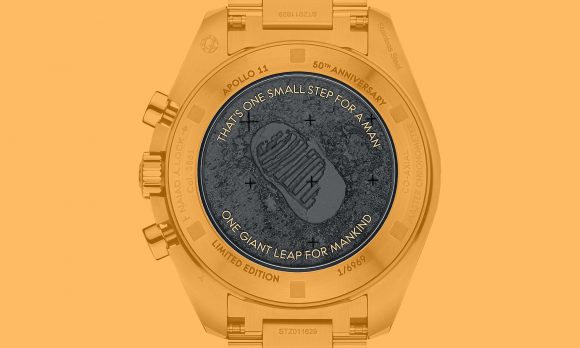 The case back does not offer a view of the new rhodium-plated caliber 3861. Rather it shows an image of an astronaut’s bootprint in the lunar soil, photographed with a 70mm lunar surface camera during the Apollo 11 extravehicular activity (EVA) on the moon. It is done on a brass base. 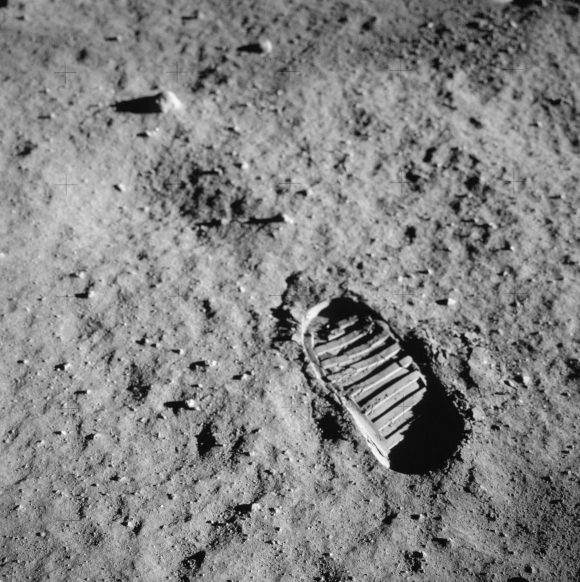 Then of course there’s the A man versus Man debate. I’ll stick to a Wikipedia quote here;

Armstrong intended to say “That’s one small step for a man”, but the word “a” is not audible in the transmission, and thus was not initially reported by most observers of the live broadcast. When later asked about his quote, Armstrong said he believed he said “for a man”, and subsequent printed versions of the quote included the “a” in square brackets. One explanation for the absence may be that his accent caused him to slur the words “for a” together; another is the intermittent nature of the audio and video links to Earth, partly because of storms near Parkes Observatory. More recent digital analysis of the tape claims to reveal the “a” may have been spoken but obscured by static. 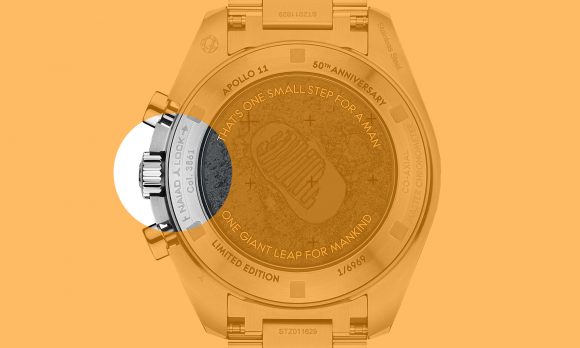 Last-but-not-least: the NAIAD-locked case back. Omega introduced this tech on the Deep Black version of the Planet Ocean back in 2016. It basically ensures that the engravings on the case back are always properly aligned. It is similar, if not the same, to what used to be known as a bayonet case back. This is the first Speedmaster Professional to be fitted with such a back.

The Omega Speedmaster 310.20.42.50.01.001 is a tribute to the Apollo 11 mission, but it also very much feels like an exercise in seeing what can be improved on the template that the classic Speedmaster Pro offers – in terms of both tech as well as finish. I suppose in time we’ll see our beloved Moonwatch updated with things such as a ceramic bezel insert, the METAS-certified 3861, and a nice NAIAD-locked case back – plus the price tag to match. 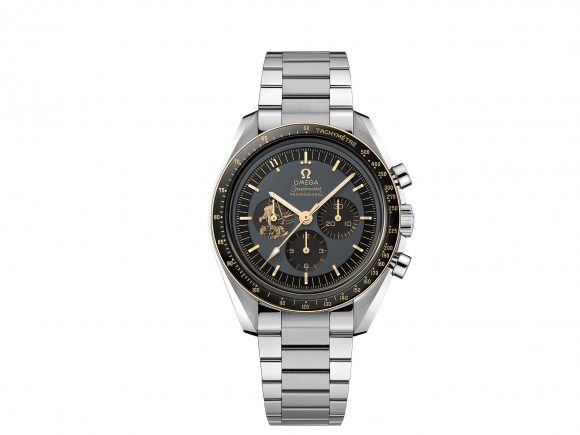 Ever since the March release of the Moonshine gold 310.60.42.50.99.001 there’s been a huge amount of rumours and speculation regarding the stainless steel variation. Well, today it’s finally here! Please welcome the Omega Speedmaster Professional Apollo 11 50th Anniversary 310.20.42.50.01.001!

The Omega Speedmaster Professional Apollo 11 50th Anniversary 310.20.42.50.01.001 has a stainless steel case of 42mm, which is crowned by a bezel in Omega’s proprietary Moonshine yellow gold. The inlay is ceramic with the text and numerals done using the Ceragold technique. The dial is two tone – a grey center with a black outer-rim and black sub dials. It features applied Moonshine gold indexes and has a laser-engraved image of Buzz Aldrin stepping out of the lunar module at 9:00. 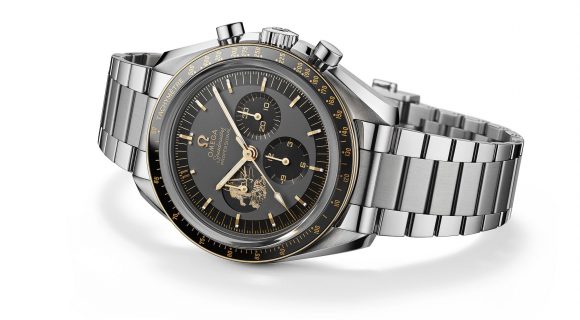 Like its gold brother, the 310.20.42.50.01.001 is powered by the brand-new caliber 3861 – though it is finished with rhodium-plated rather than Moonshine bridges. While based on the trusted (1)861, this caliber sports all of Omega’s 21st century tech such as a co-axial escapement, a Si14 hairspring and hacking seconds. It is METAS-certified. 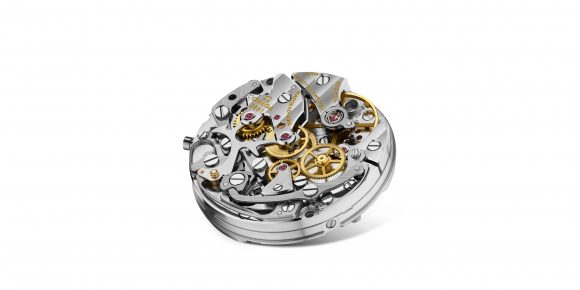 Don’t get your hopes up though: the movement is hidden from view by a closed case back. In the center there’s an insert with an image of Buzz Aldrin’s footstep on the moon plus the famous words THAT’S ONE SMALL STEP FOR A MAN and ONE GIANT LEAP FOR MANKIND. 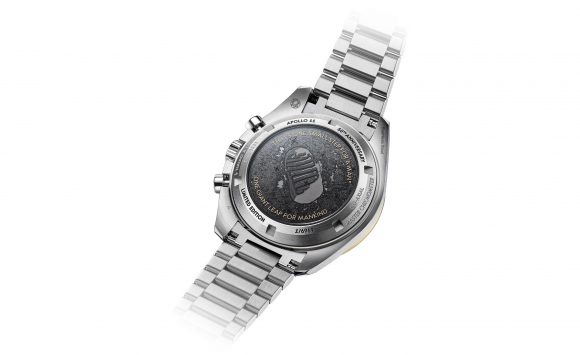 The Omega Speedmaster Professional Apollo 11 50th Anniversary 310.20.42.50.01.001 comes fitted with a new bracelet that’s made to resemble the bracelet found on the watches used for the Apollo 11 mission –  the ref 020STZ011626. A cork-covered velcro strap is included in the package. 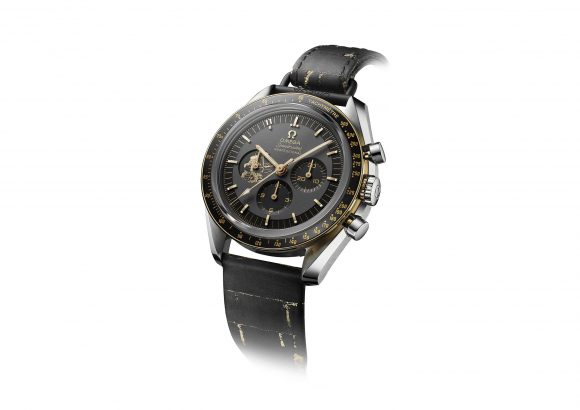 As we’ve come to expect from Omega in recent years, the box-set is a work of art. It has goodies such as two patches, a loupe, a strap-changing tool and the aforementioned extra strap. The watch itself is placed on a Lunar Module model. 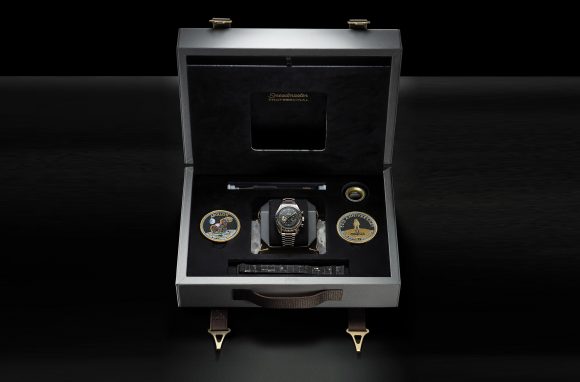 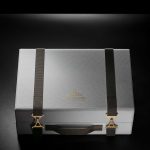 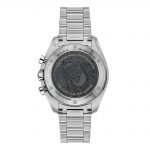 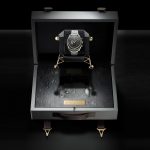 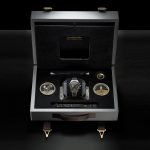 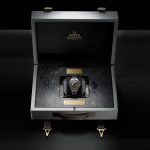 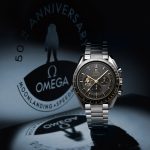 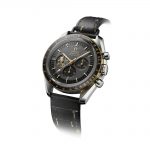 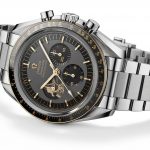 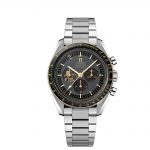 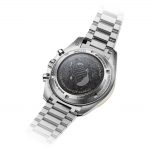 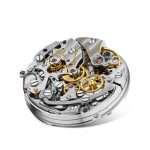