OMEGA’s Speedmaster line has a considerable heritage. Flight-qualified for manned spaceflight missions by the American and Russian space agencies, it is the only watch ever to have been worn on the moon. Its reliability is such that today, over 35 years after initially being approved for space missions, it is still the only watch approved for extra-vehicular activity in outer space. The latest addition to this world-renowned watch collection takes its inspiration from the first-ever model in the Speedmaster collection and uses an exclusive and completely new OMEGA chronograph movement. A special series of limited-edition watches has been produced to celebrate the arrival of this new collection. 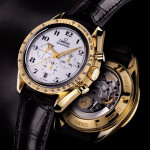 The heart of the Speedmaster Broad Arrow is undoubtedly the new movement developed by OMEGA and produced exclusively for OMEGA by Frédéric Piguet. The new calibre is a self-winding COSC-certified chronometer movement which benefits from the latest in watchmaking technology. Its column-wheel chronograph mechanism consists of a ratchet wheel with columns that govern the precision operation of various levers for the chronograph functions: start, stop and reset for the central chronograph seconds hand and the hour and minute totalisers (located at 6 o’clock and 3 o’clock respectively). Column-wheel chronographs are widely recognised as the finest chronograph movements available. However, they remain exclusive, since very few manufacturers are capable of producing this highly sophisticated mechanism. The exclusiveness of OMEGA’s new movement is further enhanced by the proven OMEGA sprung-balance without index, which offers improved regulating stability.

The special limited edition Broad Arrow models highlight the two salient features of this timepiece: the “Broad Arrow” hands of the original Speedmaster watch (reproduced in 18-carat gold on these models) and the new OMEGA column-wheel chronograph movement. The Broad Arrow’s unique hands are set off by a collection of watches in red, yellow and white gold with an authentic enamel dial, bearing the limited-series number. The OMEGA calibre 3320 is visible behind a transparent screw-in sapphire crystal case back, which bears the inscription “SPEEDMASTER ENAMEL LIMITED SERIES” and the limited-series number. It has a meticulous finish with Geneva wave decor, circular graining, rhodium-plated surfaces, gold-plated engraving, blued-steel screws and a polished bevelled chronograph module with smoothed upper surfaces. The movement has a platinum rotor with an 18-carat gold Speedmaster medallion that matches the colour of the watch case. Like the column-wheel chronograph mechanism, the enamel dial is also a rare feature, since it is difficult to produce and is available only from a limited number of manufacturers. The appeal of this watch is increased yet further by the highly restricted production run of 99 watches in each gold colour, make this limited edition a highly sought-after timepiece.

The most precious materials were chosen for the model that pays tribute to the brand-new OMEGA column wheel chronograph movement. The intricately skeletonised version of the movement, OMEGA Calibre 3221, with platinum rotor and 18 carat gold medallion, is housed in a platinum case, with platinum bezel and crown. The painstaking attention to detail on the skeleton movement is set off by an 18 carat gold dial with applied hour markers. The movement is also visible through a transparent sapphire crystal case back bearing the limited-series number. The 21 pieces of this sublime model celebrate the continuation of the OMEGA Speedmaster legend well into the 21st Century.

The limited-edition Broad Arrow models are fitted with a hand-sewn alligator leather strap with 18-carat gold foldover clasp matching the colour of the case. In addition to the screw-in transparent case-back, an OMEGA double gasket crown guarantees water resistance to a depth of 100 metres. They are a must for those who admire the illustrious heritage of OMEGA’s legendary Speedmaster watch and who appreciate the very finest in the art of prestige watchmaking.

The crowning glory in the Speedmaster Broad Arrow collection is a unique series of nine special gift boxes containing each of the three models (in yellow, red and white gold) with the authentic enamel dial. Individually numbered 1 to 9, these rare pieces will make an enviable centrepiece to any collection of prestige timepieces.