OMEGA’s Speedmaster line has a considerable heritage. Flight-qualified for manned spaceflight missions by NASA and chosen by the Russian space agency for the same purpose, it is the only watch ever to have been worn on the moon. Its reliability is such that today, over 35 years after initially being approved for space missions, it is still the only watch approved for extra-vehicular activity in outer space. The new Speedmaster Broad Arrow, which takes its name from the distinctive hands used on the very first Speedmaster models, signals not only a completely new model in the Speedmaster collection but also the arrival of a brand-new prestige watch movement that is exclusive to OMEGA. The two latest models in this new collection turn these prestige watches into stunning jewellery pieces. 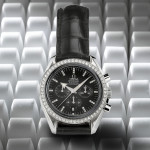 The heart of the Speedmaster “Broad Arrow” is undoubtedly the new OMEGA calibre 3303 movement, developed by OMEGA and produced exclusively for OMEGA by Frédéric Piguet – a totally new self-winding COSC-certified chronometer-chronograph movement that benefits from the latest in watchmaking technology. Its column-wheel chronograph mechanism consists of a ratchet wheel with columns that govern the precision operation of various levers for the chronograph functions: start, stop and reset for the central chronograph seconds hand and the hour and minute totalisers (located at 6 o’clock and 3 o’clock respectively). Column-wheel chronographs are widely recognised as the finest chronograph movements available. However, they remain exclusive, since very few manufacturers are capable of producing this highly sophisticated mechanism. The exclusive nature of OMEGA’s new movement is further enhanced by OMEGA’s proven sprung-balance without index, which offers improved regulating stability.

Two new Broad Arrow models elevate the luxury status of this timepiece even further, ensuring that the highly complicated movement is encased appropriately using only the most precious of materials. Both models have a stainless steel case and bezel paved with 54 diamonds, as well as hour markers on the dial encrusted with 32 diamonds. The luxury theme continues with a choice of a white mother-of-pearl or black crystal dial and a stainless steel bracelet or hand-sewn black or brown alligator leather strap. Both models share the same top-of-the-range quality levels as all other Broad Arrow models, with an anti-reflective scratch-resistant sapphire crystal, screw-in case back and OMEGA double gasket crown that ensure water resistance to 100 metres.