The Omega Speedmaster Professional 311.30.42.30.03.001 Apollo 17 45th Anniversary was introduced at BaselWorld 2017 to mark the 45th anniversary of the Apollo 17 mission. In this post I’ll go over the various elements make this 1972-piece limited edition stand out. 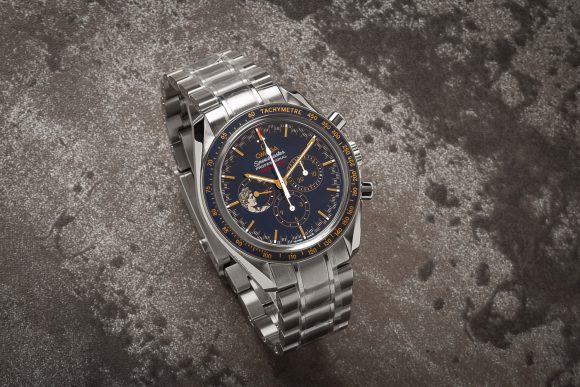 The Omega Speedmaster Professional 311.30.42.30.03.001 was introduced at BaselWorld 2017 in celebration of the 45th anniversary of the Apollo 17 mission, which was the final mission in NASA’s Apollo program and also the most recent one in which man set foot on the moon. Apollo 17 took off on December 7th, 1972 at 5:33:00 UTC, and landed back in the Pacific Ocean on December 19th at 19:24:59 UTC. Aboard were Commander Eugene Cernan, Command Module Pilot Ronald Evans, and Lunar Module Pilot Harrison Schmitt. During the mission three moonwalks were performed by Cernan and Schmitt, and the fact that Cernan was last to step back into the Lunar Module earned him the nickname Last man on the moon. His story is told in a 2014 documentary of the same name – which at the time of writing is also available on Netflix.

The Apollo XVII patch was designed by the late Robert McCall, a artist renowned for his space-influenced art and various works for NASA. The image of Apollo was based on the statue ‘Apollo Belvedere’, which resides in the collection of the Vatican and depicts the Greek God Apollo just after shooting an arrow at the serpent Python. In Mr. McCalls patch, Apollo is pictured in front of stylized image of an American eagle. The eagle is adorned with stripes resembling the American flag, and three stars depicting the crew members. The background shows the Moon, Saturn and a spiral galaxy. Last but not least, the color gold was used to symbolize the golden age of space flight that was to commence with Apollo 17. 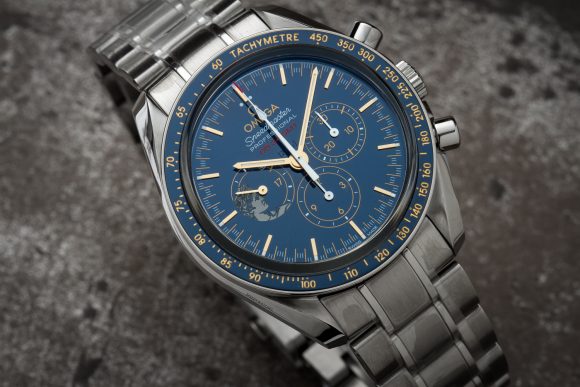 The main attraction of the Speedmaster Apollo 17 45th Anniversary 311.30.42.30.03.001 is the dial, which sports a number of features that set it apart from your average Speedy. The base is a lush blue zirconium oxide (ceramic), as indicated by the [ZrO2] just above the center pinion. 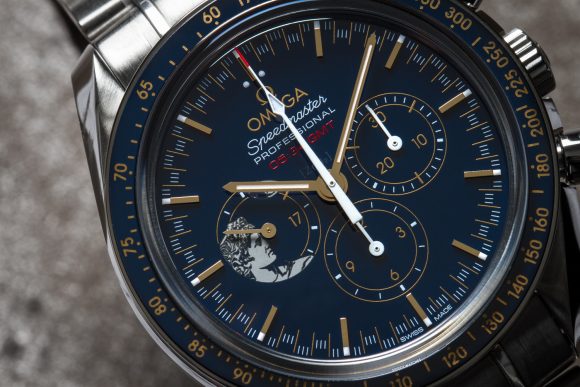 Yellow gold, which we now know was a key element of the original patch, is used for the applied hour markers, the time keeping hands, and various printed elements. The time recording (chronograph) hands are white, as are the hash marks of the seconds track. The latter is of the racing variety. It is calibrated to 1/4th of a second; the standard Moonwatch features a 1/5th of a second division. Apollo is etched into the ceramic on the 9 o’clock sub dial, which also hints to the mission through the number 17. Just below Professional we find “05:34 GMT” printed in red, indicating the time of the last step on the surface of the Moon. This color is echoed in the tip of the chronograph’s second hand. 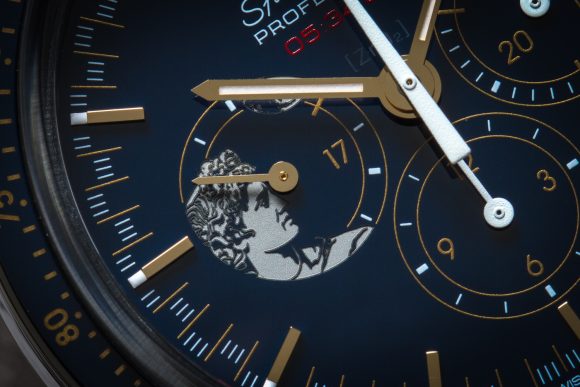 The bezel of the 311.30.42.30.03.001 is done in the same polished blue ceramic as the dial. It features a yellow gold tachymeter scale, which is created through Omega’s proprietary Ceragold process. The numerals follow a radial alignment with flips at 3:00 and 9:00 as opposed to the regular horizontal alignment, resulting in a novel, slightly bolder look. 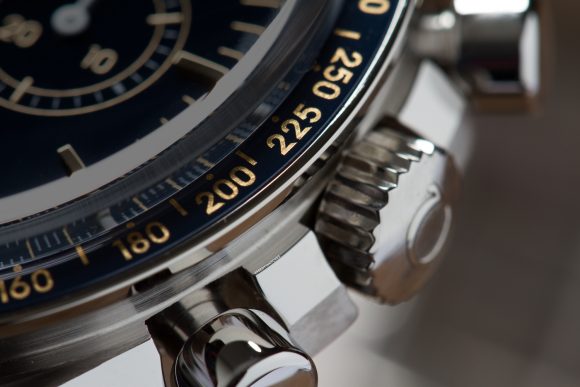 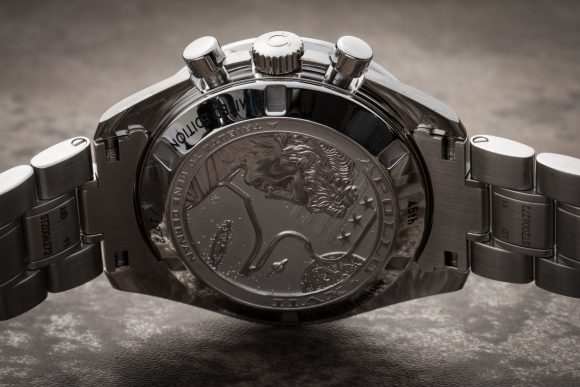 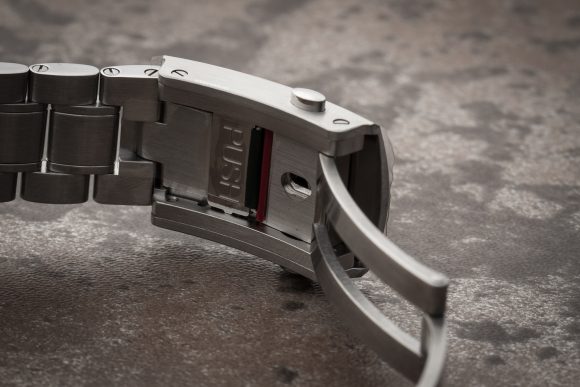 One thing that I haven’t read much about is the fact that the Speedmaster Apollo 17 45th Anniversary is the first Speedy to be fitted with the new 020STZ006270 bracelet. It’s a screwed bracelet with pushbutton-operated foldover clasp and -here’s the news- a fine adjustment system. Yay! I’m sure we’ll see more of this bracelet soon. 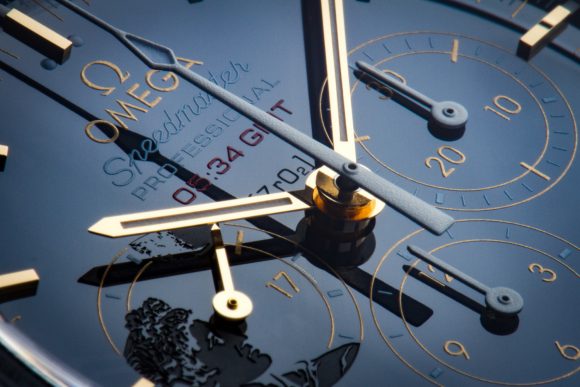 I’m still undecided. The look is an acquired taste that’s not for everyone, but when purist’s sentiments are set aside it does however feel like an interesting take on the classic Speedy. The Apollo 17 45th Anniversary manages to blend various influences and references into a mix that seems to work – and much better so in person than in most pictures. The various ways in which it references to Apollo 17 are cool, yet as such things go with Omega arguably a tad over the top. As always, I highly encourage you to go out and try to see it in real life.

At the time of writing, the watch featured in this article is in stock at Ace & Spyer and in the Ace eBoutique.