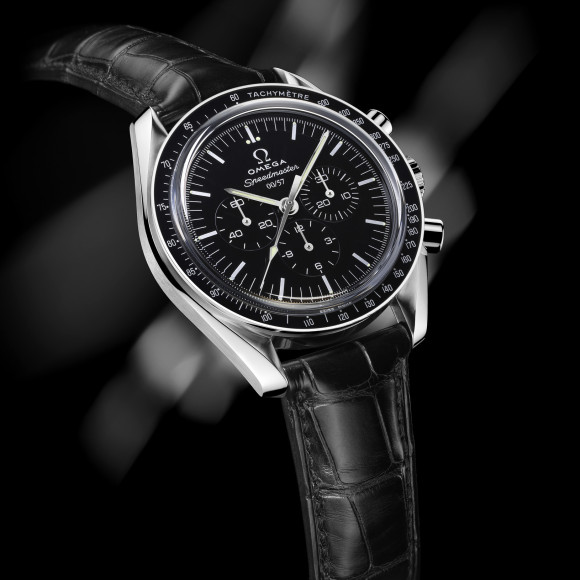 Moonwatch collectors around the world have cause for celebration as OMEGA marks the 50th Anniversary of its legendary Speedmaster Chronograph with a Limited Series release of the Speedmaster Moonwatch. No other watch has played such a crucial role in man’s quest to conquer space as the Speedmaster: the first and still the only watch to have been worn on the Moon. To commemorate this milestone, OMEGA pays tribute to the year 1957 when the Speedmaster was first launched and will limit production to 57 pieces of each of the three gold versions of the Moonwatch and to 1957 pieces of the stainless steel model, making this an exclusive and coveted collector’s item. 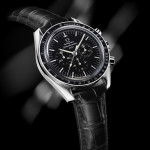 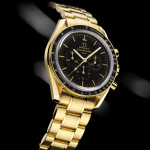 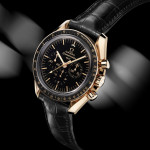 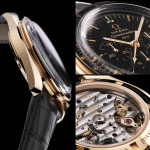 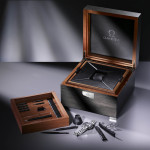 Designed to calculate speed with the chronograph and tachymeter functions, the original 1957 Speedmaster has proved time and time again an invaluable and life-saving partner to pilots and astronauts. With an impressive track record of 11 NASA tests and six Moon landings, the Speedmaster has been on every US manned space flight and is currently on board Russia’s ISS International Space Station making this manual-winding timepiece a cornerstone of horological and space history.

OMEGA’s Speedmaster Chronograph was officially “flight-qualified by NASA for all manned space missions” in 1965 although the Speedmaster had already been to space on the wrist of astronaut Walter Schirra on board the Sigma 7 in 1962. Able to withstand extreme temperature changes and zero gravity, the Speedmaster touched down on the Moon with Apollo 11 astronauts in July 1969 and subsequently became known as the Moonwatch. During the troubled and dramatic Apollo 13 “Houston, we’ve had a problem here” mission of 1970, the Speedmaster saved the day. The explosion of a reserve oxygen tank compromised all the time keeping mechanisms on board, except one. Commander James Lovell relied on his Speedmaster Chronograph to time, within a fraction of a second, the extremely critical firing of the re-entry rockets allowing for the safe return of his crew to planet Earth. In recognition of the crucial role that its Speedmaster chronograph played on the Apollo 13 mission, OMEGA received the “Snoopy” Award in October 1970 – the highest honour awarded by NASA astronauts. The Speedmaster was present for yet another decisive moment in space history during the 1975 joint USSR-USA Apollo-Soyuz docking. The symbolic handshake in space at the height of the Cold War revealed that both crews were wearing the Speedmaster Chronograph.

Moonwatch enthusiasts will appreciate the physiognomy and classic Speedmaster heritage of this chronograph with its famous curved and facetted horns, the characteristic tachymeter scale on the bezel, the large push buttons to activate the chronograph and the hallmark black dial. However, as befits a 50th Anniversary, this Limited Series watch features a striking black enamel dial. Even with today’s technological advances, masterful enamelling remains an art and is the fruit of labour-intensive work and dedication. Enamel fuses to metal surfaces at extremely high temperatures of over 1000° Celsius. To obtain superior results, several layers of enamel are necessary which in turn are fired and then polished. The rich, inky black of this Limited Series Moonwatch dial is the result of mixing metal oxides with the transparent enamel and firing the piece repeatedly until the perfect tone has been obtained.

As a tribute to its lineage, this Limited Series Speedmaster Professional Moonwatch features the original 1957 OMEGA logo applied on the dial. Just below the vintage logo is the Limited Series number 00/57 for the three gold versions of the watch and 0000/1957 for the stainless steel version.

Although the original 1957 Speedmaster featured the iconic “Broad Arrow” hands, these were replaced in 1963 with “Dauphine” hands. Being slimmer, they create more space on the dial for a clearer view of the three counters with 12 hour, 30 minute and 60 second totalisers that proved vital on the Apollo 13 mission. The hour and minutes hands, the central chronograph seconds hand and the baton hour markers have been highlighted with Super-LumiNova for maximum legibility in any conditions – on earth or in space. A scratch-resistant sapphire crystal with anti-reflective treatment protects the enamel dial of this Limited Series. This 42 mm manual-winding timepiece has a 55-hours power reserve and is water-resistant to 100 metres/330 feet. Although the face is a replica of the Speedmaster Professional worn on the Moon, the heart of this anniversary watch beats with even greater precision thanks to the incorporation of the Calibre 3201 manual movement with Co-Axial escapement. Introduced by OMEGA in 1999, this revolutionary and proprietary technology considerably reduces friction in the mechanical watch movement and so diminishes the dependence on lubrication ensuring precision time keeping for longer periods of time. Other variants from the original are the COSC – Contrôle Officiel Suisse des Chronomètres – certified chronometer status of the watch and a superior column-wheel system driving the chronograph module. The latter is designed to ensure a smooth start to the sweep of the seconds hand when the chronograph is activated. It also provides precision stop and reset functions that do not interfere with the main timekeeping function of the watch. The screw down glass case back displays the luxurious finish of the movement complete with blued steel screws and column wheel, circular graining and gold-plated engraving, white rhodium-plated movement and Geneva wave decoration.

Innovative changes have been made to the bracelet. Space aficionados will remember the original ‘Velcro’ strap that fastened the Speedmaster to the exterior of the astronauts’ spacesuits during their missions. This year’s 50th Anniversary Limited Series Moonwatch has been fitted with OMEGA’s patented “screw and pin” bracelet inspired by the first solid link bracelet of the 1960’s. Changing the links of the bracelet to suit the wrist size has never been easier with OMEGA’s ingenious system of discreet screws. This highly fluid and ergonomic bracelet follows the contours of the wrist perfectly and is available in red gold, yellow gold, white gold and steel. The links have been beautifully wrought and brushed and polished for greater contrast and effect. In addition to the bracelet, the Limited Series Speedmaster Moonwatch Chronograph comes with a black alligator leather strap with a foldover buckle to match the metal of the case.

To mark the occasion, the commemorative Moonwatch will be presented in a special handmade wooden presentation box with a beautiful marquetry rendition of the seahorse logo on the lid. The watch’s certificate of authenticity, the black alligator strap, a series of tools including a magnifying glass for adjusting the length of the “screw and pin” bracelet or for changing the bracelet for the alligator strap, operating instructions for the tools and a catalogue are all included in the Limited Series presentation box. The four feet of the box have been engraved with eight dates. Each date commemorates a moment in man’s relentless quest to conquer new horizons and Speedmaster’s invaluable role during these exploits: 1957 – the launch of Speedmaster; 1965 – Speedmaster’s first venture in outer space during the Gemini IV spacewalk; 1968 – Speedmaster accompanies the Plaisted expedition to the North Pole; 1969 – Apollo 11 Moon landing and Moon walk; 1970 – the troubled Apollo 13 mission; 1975 – the historic USA-USSR space docking on Apollo Soyuz mission; 2007 – the 50th Anniversary of Speedmaster and 2011 – marking the year in which the SolarImpulse will circumnavigate the globe powered solely by solar energy. The Limited Series Speedmaster Moonwatch Chronograph Co-Axial 1957 offers collectors a rare opportunity to own a piece of space and horological history.