It is now 50 years since mankind took its first daring steps onto the moon – a moment that changed history (and the limits of possibility) forever. On this golden anniversary, OMEGA is celebrating the occasion with a brand new Speedmaster that has a very special connection to the astronauts and the legacy of that Apollo 11 mission. 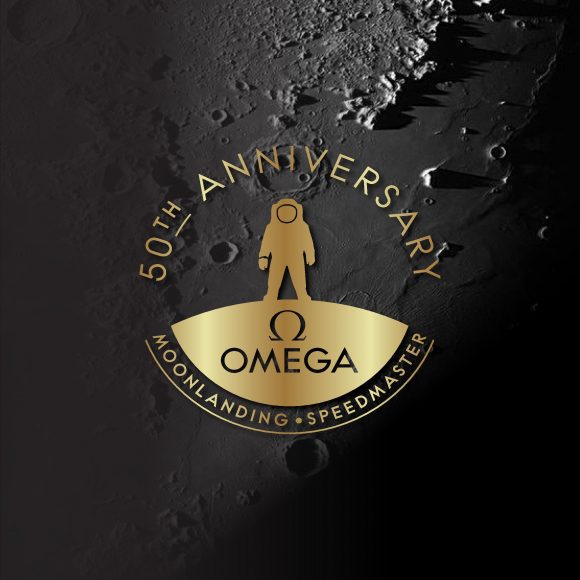 How OMEGA reached the moon

Neil Armstrong and Buzz Aldrin became the first humans to walk on the lunar surface on the 21st of July 1969. Their moonwalk lasted just two and a half hours, but their achievements left a defining footprint on the history of space exploration. 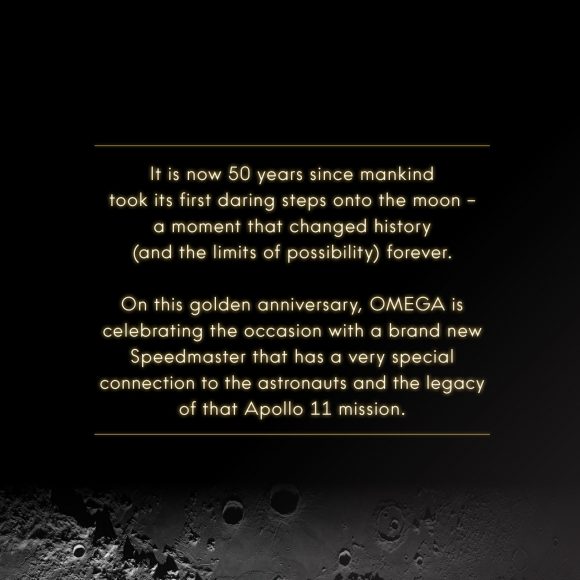 The OMEGA Speedmaster Professional became the first watch worn on the moon.

It was during this iconic moment that the OMEGA Speedmaster Professional became the first watch worn on the moon. The Apollo 11 mission is certainly the most celebrated moment in OMEGA’s considerable space heritage. But the journey to reach that point began more than 10 years earlier, in 1957, when the very first OMEGA Speedmaster was launched. 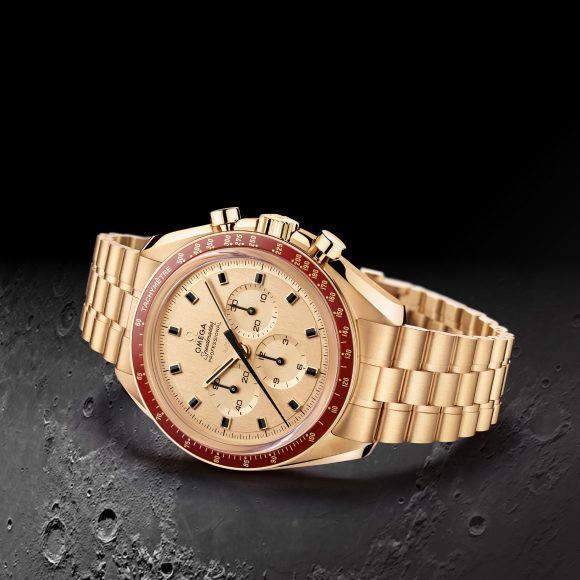 Thanks to its robust, reliable and easy-to-read design, the Speedmaster became known as the “pilots’ choice” and was adopted by those in the U.S Air Force. Many of those aces became Mercury stronauts in NASA’s first manned space programme and, in 1963, one of those astronauts, Walter Schirra, took his own Speedmaster CK2998 on the Mercury-Atlas 8 mission. Orbiting the Earth six times, his privately-owned model became the first OMEGA watch worn in space. 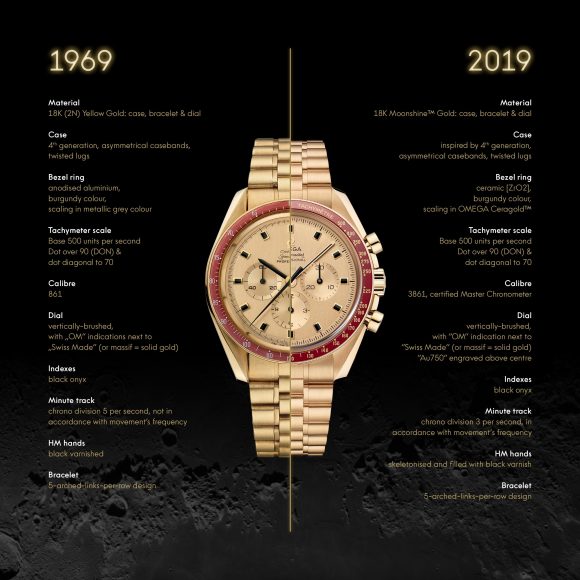 By 1964, NASA’s space programme was accelerating rapidly and it officially went in search of one watch that it could rely on for all of its manned-missions. Flight Crew Operations Director, Deke Slayton, issued a request for wristworn chronographs from different watch manufacturers around the world. Several brands, including OMEGA, submitted their timepieces for the punishing tests – such as thermal, shock, vibration and vacuum examinations amongst others. Only the OMEGA Speedmaster survived these tests and, as a result, it was declared “Flight Qualified for all Manned Space Missions” on the 1st of March 1965.

From that moment, OMEGA was the only supplier of watches for NASA’s Human Space Flight Program. It was trusted throughout the following Gemini Program, and, of course, the Apollo Program – which had its sights set on the moon. 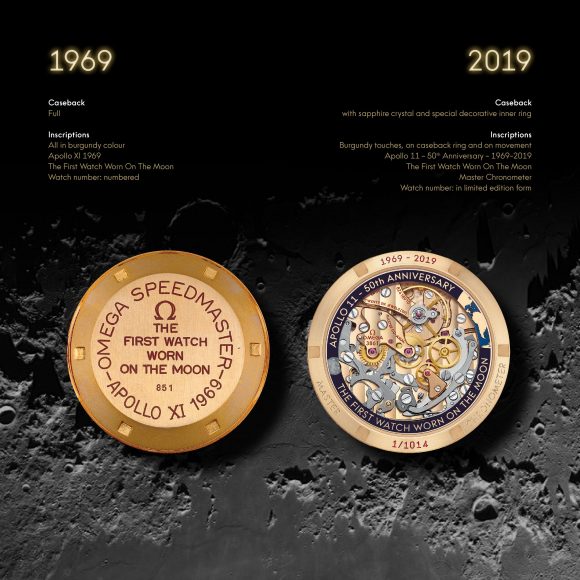 James Ragan, the NASA engineer who qualified the Speedmaster in 1965 has spoken about the importance of OMEGA by saying, “The watch was a backup. If the astronauts lost the capability of talking to the ground, or the capability of their digital timers on the lunar surface, then the only thing they had to rely on was the OMEGA watch they had on their wrist. It needed to be there for them if they had a problem.”

With the eyes of the world on Apollo 11 in 1969, every piece of technology and kit had to be just right. There was no room for error. That’s why it is such an honour for OMEGA to look back and know that its watches were implicitly trusted by everyone involved. 50 years later, we are still incredibly proud to have timed mankind’s greatest hour. 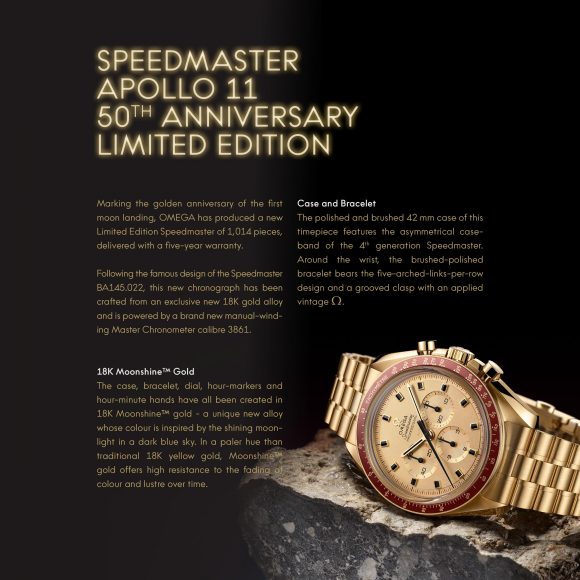 Marking the golden anniversary of the first moon landing, OMEGA has produced a new Limited Edition Speedmaster of 1,014 pieces, delivered with a five-year warranty. Following the famous design of the Speedmaster BA145.022, this new chronograph has been crafted from an exclusive new 18K gold alloy and is powered by a brand new manual-winding Master Chronometer calibre 3861. 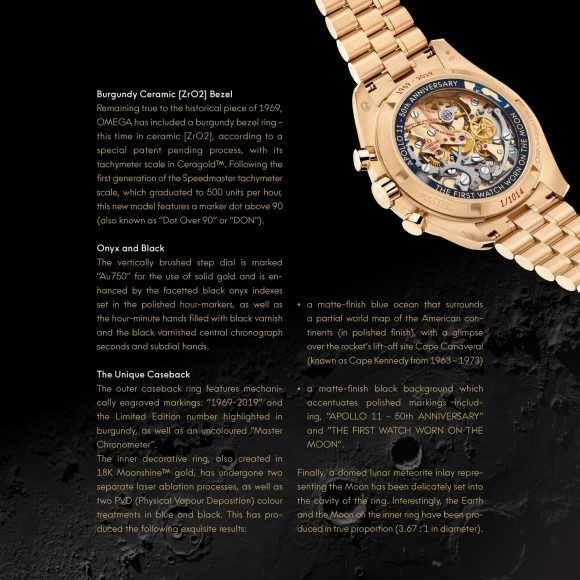 More info via our partners of WatchBase. For inquiries please contact Ace Jewelers!