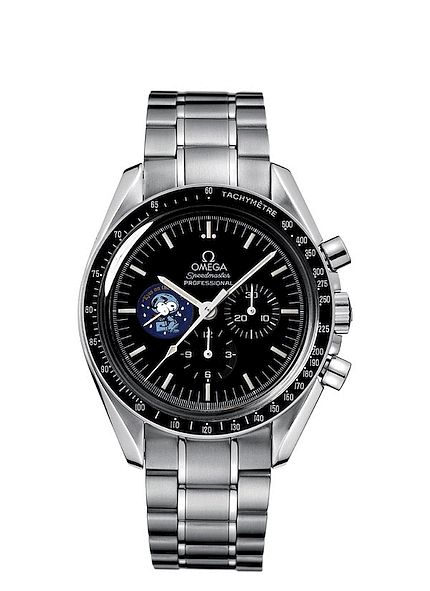 First of all – we probably owe you an apology. Last two weeks have been kinda slow on SpeedyWatches.com. Work and other obligations took their toll.. But we’re here now!

Our choice for the Speedmaster of the Week for week 39 is [of course] another one of our favourites: the Eyes on the Stars, a.k.a. the Snoopy. To horological ignoscenti (does that word exist??) probably one of the strangest Speedmasters ever – a cartoon character on a high-end watch? – but to those in the know a token of Omega’s contributions to NASA’s space program.

The ‘Silver Snoopy Award’ is a special honour awarded to NASA employees and contractors for outstanding achievements related to human flight safety or mission success (source). Omega has been a part of the space program since it’s early days – but the Snoopy Award was awarded to Omega for a special occasion:

In April 1970, the OMEGA Speedmaster contributed to the rescue of the Apollo 13 mission from a potential disaster, earning OMEGA the “Snoopy Award”, the highest distinction awarded by the NASA astronauts. (source)

While Omega puts it somewhat more dramatically than NASA (or Wikipedia) does, it is still a mayor achievement – one that was aptly celebrated with this 2003 Speedmaster Professional. It was made as an limited edition of 5441 pieces – but still, it is somewhat hard to find at a decent price nowadays.

You might want to check out the movie about Apollo 13 – IMDB link!