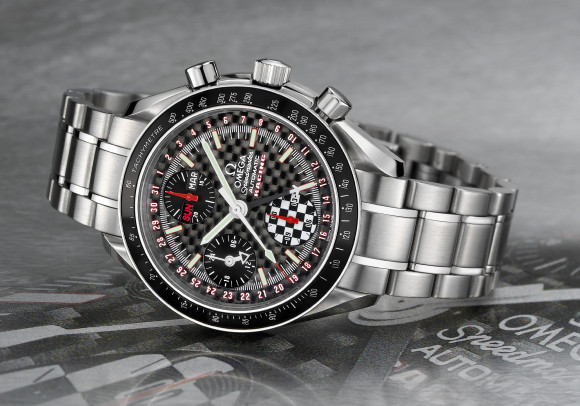 In the 2002 Formula 1 race season, Michael Schumacher secured an historic fifth world championship driver’s title. This master of speed has been an OMEGA ambassador since 1995 and has comfortably secured the Formula 1 driver’s championship titles over the past three years. In celebration of each of these victories, OMEGA launched special limited editions of the Speedmaster collection that Michael Schumacher promotes. The latest model, celebrating Schumacher’s fifth world championship title, is the Speedmaster Day-Date Racing. 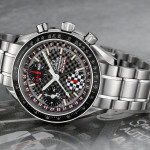 Michael Schumacher entered the Formula 1 history books in 2002 by equalling Juan Manuel Fangio’s record of 5 Formula 1 World Championship titles, which was established back in the 1950s. Schumacher currently reigns supreme as the world’s most successful driver, having won a total of 945 points in his career to the end of 2002 – more than any other Formula 1 driver in history. The 2003 limited-edition OMEGA Speedmaster Day-Date Racing is, however, linked with motorsport by more than just its name and OMEGA’s ambassador Michael Schumacher. Its design traits clearly place it in the context of Formula 1 and thus offer the perfect collector’s piece for fans of this sport. The dial is made of high-tech carbon fibre, for example, which gives an immediate indication of the watch’s special character. Another unique touch is the red outlining used for the RACING inscription, hour markers and dates on the dial. The ultimate limited-edition cachet is conferred by the special case back, which bears the inscription “WORLD CHAMPION 2002” in red and Michael Schumacher’s signature in black.

The same proven OMEGA calibre 1151 found in the standard Day-Date models is used in this limited-edition model, with day, month, date, hour, minute and continuous seconds display. The self-winding movement, which has a power reserve of 44 hours, also has a chronograph function displaying elapsed times to within ¼ of a second using the central chronograph hand. Even the chronograph sub-dials at 12 o’clock (minutes) and 6 o’clock (hours) have an unmistakable F1 touch – the former incorporates the day and month displays with the Formula 1 race day, Sunday, highlighted in red, whilst the latter has a chequered flag background. The sub-dial at 9 o’clock comprises an additional arrowhead 24 hour hand (GMT) in addition to the usual continuous seconds hand. A separate central arrowhead hand points to the date on the 1 – 31 scale around the circumference of the dial.

No Speedmaster would be complete, of course, without the tachometric scale on the bezel, allowing the calculation of speeds from 60 to 500 km/h based on a 1000m reference distance. Equally important standard features of every Speedmaster are the water resistance guaranteed to a depth of 30 metres and the scratch-resistant sapphire crystal with interior anti-reflective treatment that protects the distinctive look of the resolutely sporty dial. Production of this model, which is available exclusively with the stainless steel Speedmaster bracelet, is limited to 5,555 numbered units. Experience with the previous limited-edition Speedmaster Racing models has shown that collectors and Formula 1 fans alike appreciate the distinctive style of these timepieces. The 2003 Speedmaster Day-Date Racing is sure to be no exception.