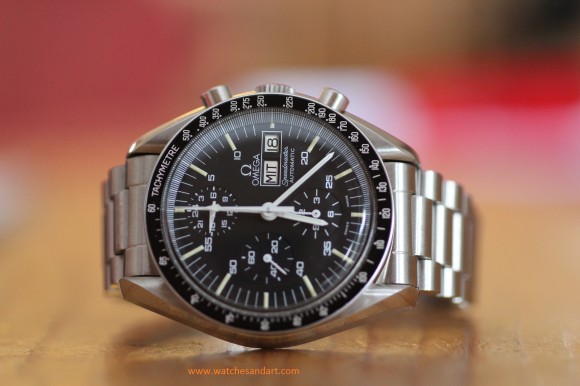 Our friend Boris from WatchesAndArt.com mailed us this picture of his stunning Omega Speedmaster Automatic ‘Holy Grail’ reference 376.0822 in seemingly stunning condition.

The 376.0822 was introduced in 1987 and dropped from the Speedmaster line-up two years later. It is powered by caliber 1045, Omega’s version of the Lemania 5100. This movement is often considered to be THE toolwatch chronograph movement by choice, mostly based on its solid performance under harsh circumstances. It has powered numerous watches from numerous brands, most notably the Sinn EZM-1 and 142 and Tutima Bundeswehr chronograph. In recent years it has gained cult status, with the Speedmaster 376.0822 being the most sought-after watch driven by this movement.

The 376.0822 was nicknamed the Holy Grail by the late Chuck Maddox. Read his original posting over here.