Introducing the Master Chronometer Calibre 3861: the driving force behind OMEGA’s Apollo 11 tributes and a movement with its own lunar legacy

An OMEGA was the first watch worn on the Moon; and to mark the 50th anniversary of that golden moment the brand has released a collection of commemorative timepieces powered by the Master Chronometer Calibre 3861, a descendent of the movement that went to the Moon.

OMEGA’s legendary Calibre 321 was the direct descendent of the 27 CHRO C12 that was first designed and produced in 1941. Renamed calibre 321 in 1949, the robust and elegant chronograph movement has been a favourite ever since and is still highly sought-after by watch collectors around the world, as it was the 321 that powered the Speedmaster watches qualified by NASA for use on all manned space missions; and a modified version of the calibre drove the Speedmaster chronographs worn by Apollo 11’s astronauts. 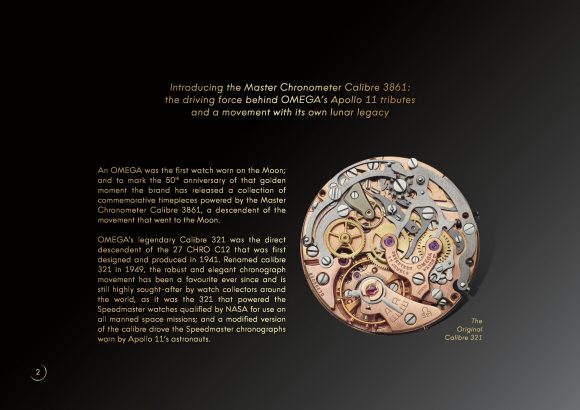 In-line with OMEGA’s continuing commitment to innovation and technical advancements, the Calibre 321 evolved to become the Calibre 861, which was used between 1968 and 1997. This was followed by the calibre 1861, which retained the same frequency as the 861, but was made with rhodium-plating.

It took 4 years of trial-and-error to produce the calibre’s most recent incarnation. OMEGA was determined to produce a movement that could be Master Chronometer certified, yet perfectly match the dimensions of the 1861. That meant finding a way to fit all of the new state-of-the-art componentry into a space more suited to an older movement. A challenge certainly, as the 3861 has 240 components compared to the 1861’s 234, but OMEGA’s engineers were up to the task, improving power reserve, chronometric performance and magnetic resistance. Daily deviations were improved from -1+11 to 0+5 seconds, and a stop second function was added, allowing the wearer to stop the seconds hand with a pull of the crown and reset the time with absolute precision. 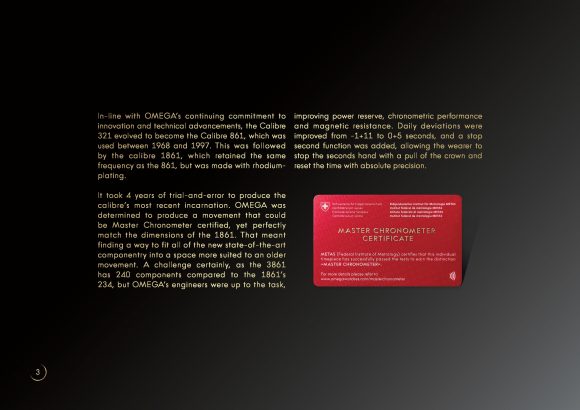 Thanks to 21st century machining, it was also possible for OMEGA’s engineers to subtly reshape the teeth of the wheels, which allowed for tighter contacts and smoother running. As a tribute to the 1861, the new movement’s frequency remained the same (21,600 v/h). However, the jewel tally was increased from 18 to 26, as eight extra jewels were needed for the upgrade. Half of them to ensure the smooth running of OMEGA’s revolutionary Co-Axial escapement, which had replaced the more traditional Swiss Anchor – and four more for general technical improvements. Another significant change was the complete removal of the frequency regulator. As a moving part, the tiny lever added to the risk of accidental frequency shifts, so the decision was made to do without it. On the new 3861, this was replaced by four adjustable screws on the balance wheel. Thanks to the inclusion of OMEGA’s Co-Axial escapement and silicon Si14 balance spring, the 3861 offers extraordinary levels of magnetic resistance up to 15,000 gauss, and is able to pass the industry’s toughest tests and achieve Master Chronometer certification. 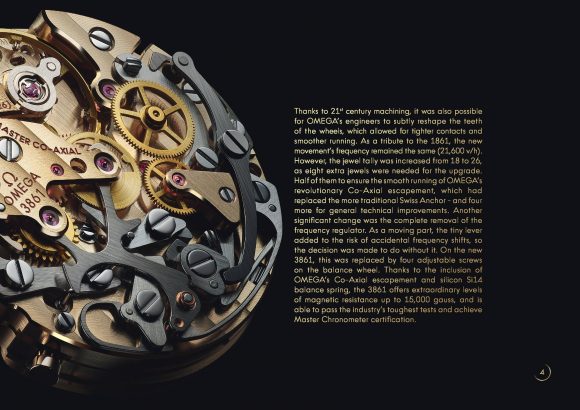 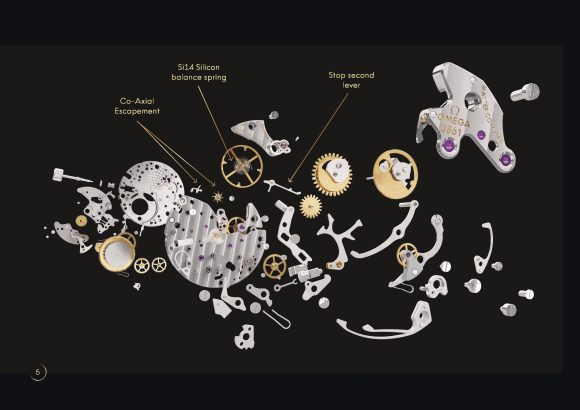 Aesthetically, the latest movement is closer to the 1861’s more beautiful cousin, the 1863, which featured gold engravings and Geneva waves. To match the case materials of the Apollo 11 tributes, two versions of the 3861 were produced: one with rhodium-plated bridges and main plate; and another in gold with a Moonshine™ goldplated finish. The use of Moonshine™ gold-plated main plate and bridges marks another first for the pioneering brand. The innovative patent-pending material was introduced in 2019 to coincide with the lunar landing’s 50th anniversary. 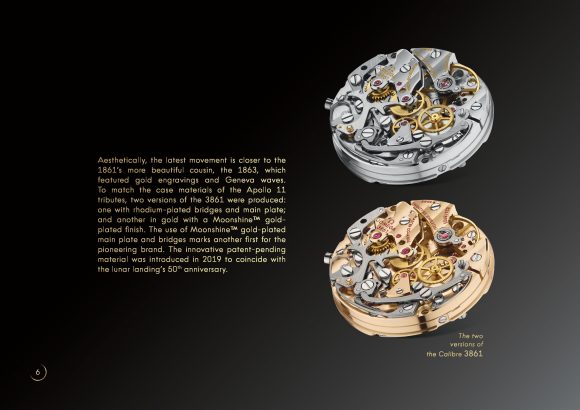