The source of many a myth and legend, the OMEGA Speedmaster has been the choice of astronauts and space agencies for half a century. This “common” object has become one of the most famous watches in the world and has been associated with some of humankind’s greatest adventures in space, earning it the name “the Moonwatch”.

Upon its release in 1957, the Speedmaster instantly changed the face of the chronograph wristwatch. Originally introduced as part of the Seamaster line, this chronograph was the first to have the timing scale on the bezel, a world premiere that secured the Speedmaster’s position as the most iconic chronograph ever created. The Speedmaster´s association with space exploration began in 1962 when NASA astronauts Walter “Wally” Schirra and Leroy Gordon “Gordo” Cooper purchased their first flight-watches: the second generation Speedmaster model with the reference CK2998. These privately-owned chronographs were to be used on the upcoming Mercury program flights. And indeed, the very first Speedmaster to fly on a space mission was Schirra’s own CK2998 during the Mercury-Atlas 8 (Sigma 7) mission. Two and a half years later, towards the end of the Mercury program, the astronauts approached Operations Director Deke Slayton and asked to be issued with an official watch for use during training and eventually flight. As every piece of equipment from the Mercury program was being re-evaluated and re-designed for the upcoming Gemini and Apollo programs, the timing could not have been better. In September 1964, Deke Slayton issued an internal memo stating the need for a “highly durable and accurate chronograph to be used by Gemini and Apollo flight crews”. This memo landed on the desk of engineer James Ragan who sent a “Request for Quotations” and a specification sheet for wrist chronographs to different manufacturers. Of the brands contacted, only four responded and James Ragan asked each to supply three watches. OMEGA’s copy of the request was received by its U.S. affiliate in New York who proposed and delivered three Speedmasters with the reference ST105.003. The tests which ensued were designed literally to test the watches to destruction. The watches were subjected to temperatures ranging from 71°C to 93°C over a two-day period, after which they were frozen at -18°C. They were placed in a vacuum chamber heated to 93°C, and then subjected to a test where they were heated to 70°C and then were immediately cooled to -18°C – not once but fifteen times in rapid succession! When this had been completed, the watches were subjected to 40 G in six different directions and to high and low pressures. Their performance and ability to function was tested in an atmosphere of 93% humidity and in a highly corrosive 100% oxygen environment. The watches even had to endure noise levels reaching 130 decibels. Finally, they were vibrated with average accelerations of 8.8 G. In the end only one watch had survived: the Speedmaster. As a result of surviving the testing, the Speedmaster was declared “Flight Qualified for all Manned Space Missions” in March 1965. Just three weeks later, the Speedmaster went into space officially for the first time on the wrists of Virgil “Gus” Grissom and John Young during their Gemini 3 mission. On June 3rd 1965 Edward H. White wore his Speedmaster on America’s first spacewalk, during the Gemini IV mission. Another four years passed and NASA was preparing for the first lunar landing. The crew had been selected and the decision was made that Neil Armstrong would be the first man to walk on the lunar surface. NASA had, by this point, adopted the most recent versions of the Speedmaster that was available at that time, the ST105.012 and ST145.012, for the Apollo program; however, as NASA still had quite a few ST105.003 in stock from the original supply, this model was also routinely issued to the astronauts. On the 21st of July 1969 at 2:56 GMT, Neil Armstrong stepped off the “Eagle” to become the first human to stand on another world. Buzz Aldrin was fifteen minutes behind him and the Speedmaster Professional became the first watch to be worn on the Moon. More than 45 years and countless missions later, the Speedmaster remains flight-qualified and boasts a huge following. In fact, no other piece of equipment – let alone a watch – can claim to have been used during the Mercury, Gemini, Apollo, Skylab, Soyuz, Salyut, Space Shuttle, MIR and International Space Station programs. Without any doubt, the Speedmaster is the ultimate space watch. 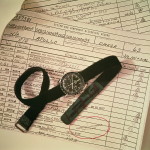 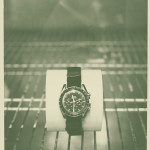 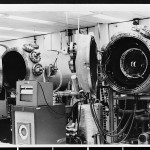